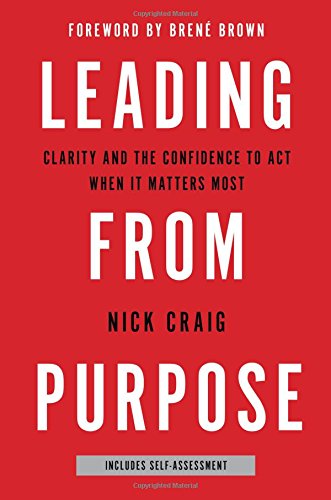 Mission statements are fine and employee handbooks are dandy, but what really matters in an organization is the purpose behind it all. That’s the message in a new book from Nick Craig, founder and president of Core Leadership Institute. Whether in business or in our personal lives, a strong sense of purpose offers firm footing on shifting ground. After working closely with 10,000 senior executives over 10 years, Craig learned that for “95% of them, it wasn’t about quitting their job and going to work for Save the Children…. [It] was about realizing that purpose is present in every moment, and we can choose to operate from it or not.” Craig joined the Knowledge at Wharton radio show on SiriusXM to talk about his book, Leading from Purpose: Clarity and the Confidence to Act When It Matters Most.

Knowledge at Wharton: Your book suggests that purpose can be a constant in an ever-changing world. Can you explain that?

Craig: The level of uncertainty that we find ourselves in these days, where what was stable for the last 50 years all of the sudden isn’t, definitely humbles all of us. I think the biggest insight I have from the 10,000 people I’ve worked with is that the one thing that doesn’t change is our purpose. It’s the solid ground that we actually can stand on.

Each of us has a unique purpose. I think the point here is that for every leader, no matter who they are — even if they’re in the same situation as someone else — what they do and how they do it is their own signature. In some sense, that’s the purpose that they have. Knowing what that [purpose is] is the key to the kingdom.

Knowledge at Wharton: With the growing reliance on digital and automation, how much does the idea of purpose serve in business?

Craig: That is actually why [the idea of] purpose really is sticking. I get to work with [companies like] Ben & Jerry’s [and I do] programs at Wharton or West Point. I’ve got a digital bank in Amsterdam where all 5,000 employees are doing this work. The bottom line is that we all need something to stand on that doesn’t change. All this other stuff is happening, but the beauty of purpose is that it doesn’t change.

Knowledge at Wharton: A sense of purpose would be very important in the military, correct?

Craig: I’ve done this program all over the world, so when I went to West Point to work with faculty, I was curious about whether this was going to work…. In some senses, that group took it on even more strongly than some of the others because every individual there has an underlying ethos of service. When you add purpose to service, you begin to see what has made them take a career that isn’t the one where they would make the most money, in which it’s very likely that if they’re successful, they’ll be in a firefight. Very few people have that as their definition of success.

“The bottom line is that we all need something to stand on that doesn’t change.”

You’ve got to have something truly solid that you feel as to why you’re doing this stuff. What is the intrinsic motivation? The word “love” was in a lot of their purpose statements, and it was a shock to me. But you realize that if you’re going to give your life for your country, if love isn’t in your purpose, chances are you’re in the wrong job.

Knowledge at Wharton: You believe that purpose is most impactful when we use it in both our business and personal lives. Can you explain?

Craig: The beautiful thing about purpose is that you don’t really turn it off. You have a different way you express it. How we express it when we’re hanging out with our kids or our neighbors is very different than when we’re sitting in a very serious boardroom meeting, dealing with analysts. At the same time, there’s something you bring to the situation that someone else with the same skill wouldn’t. And that’s your purpose.

I think purpose is a way in which we see the world that is ours, that comes from our magical moments as a child or from our challenging life stories. But each of us has a different way of dealing with those. I see purpose as the thread through our life that is the constant while everything else changes. The challenge is most of us don’t know what it is.

To paraphrase Einstein, “Everyone’s a genius. But if you ask a fish to climb a tree, it will spend its whole life thinking that it’s stupid.” The challenge for most of us is that we’re being asked always to climb a tree. But what if we’re the fish? The challenge is, if you know what you are, then you can truly step in and own it. And if you own it, then you can lead from it.

Knowledge at Wharton: How can “purpose” be used in business?

Craig: If we look at the most iconic brands out there — whether it’s Lego, Amazon, Starbucks, Apple or Southwest Airlines — those are all based on the purpose of their founders. I was working with Jostein Solheim, the CEO of Ben & Jerry’s. His purpose was helping people thrive in paradox and ambiguity [when working toward a goal that matters]. A purpose like that means that you’re happiest when all hell breaks loose.

“If we look at the most iconic brands out there — whether it’s Lego, Amazon, Starbucks, Apple or Southwest Airlines — those are all based on the purpose of their founders.”

He was about to leave Ben & Jerry’s and go onto the next thing, because it was a 24-month turnaround, and he was a turnaround guy. When he realized what his purpose was, he said, “No, I’m going to stay.” He stayed for eight years and took the business from half-a-billion to a billion dollars.

One of the biggest, most powerful, most satisfying things he did was to approve the release in 2011 of a [limited release] flavor called Schweddy Balls. No one ever forgets it. How many ice cream flavors have you ever remembered?

Knowledge at Wharton: Obviously, the name was taken from a popular skit on “Saturday Night Live.”

Craig: He initially said, “No, I’m not doing this. This is crazy. Everybody’s going to be completely crazed. We’re going to be D-listed by Target and Walmart.” But he stepped back and said, “Now that I’m here and I’m not going anywhere, what do I really need to do to make this brand come back?” They did it. Wal-Mart ended up D-listing them. They did have a lot of mothers’ groups really upset at them because there were lots of teenage boys running around screaming this thing. But when that flavor came out, the brand was back. They’ve since done all kinds of flavors. They’ve done a Black Lives Matter flavor.

This only happened because Jostein became clear [about his] purpose, and he was on that stage to sing his song. If he had taken this huge promotion that they were offering him and six-figure raise and all the things that went with it, he would have been managing somebody who would do that, but not doing it himself. So, he turned down the promotion that 99.999% of us would never turn down. But in doing so, he gave all of us a brand that is iconic.

Obviously, he didn’t do this by himself. I’ve worked with the whole management team, and they all have such an incredible sense of purpose. Their social activism at Ben & Jerry’s is probably the best of any company that I’ve seen because they so believe that their purpose isn’t selling ice cream. Their purpose is to change the world. What they realize is that [when there are] two people who have opposite points of view around abortion or whatever it may be, if you give them ice cream, they’ll have a conversation.

Knowledge at Wharton: Tell us about Lego?

Craig: I go around the world running programs and working with executives. One of the things we do is help them look back at when they were a kid and some of the magical moments in life before everybody told them who they should be. They get a lot of really powerful narratives and stories that help them think about that purpose that’s always been with them.

For many people, their experience with Lego has a magical moment in it. I cannot tell you the number of people whose purpose statement had the word Lego in it. I’ve got one guy who says his purpose is to be the Lego poet that helps people connect head to heart. I have another guy whose purpose is to build the Lego helicopter that actually flies. These are very powerful metaphors for each of these individuals. There’s something about that brand that’s iconic in that sense.

How do you fully bring that to the next level? All toy companies right now are struggling. Lego is just like every other company, reinventing itself and discovering what is the next thing. But the one interesting thing is that the purpose hasn’t changed. That’s the most powerful compass for them.

Purpose will keep focusing you on what is it you really need to do. But if you get sucked into how you’re doing it today, you’ll forget the purpose. IKEA, for example, has a beautiful purpose, which is to make what’s available to the few to be available to the many. Unfortunately, they forgot that the internet showed up.

“Ten years ago when I was doing this work, nobody was doing it. Now every time I turn around, somebody’s talking about purpose.”

All of the sudden, their sales went down as their competitors were able to get on the internet. They had been so focused on their store experience. Well, their purpose has nothing to do with stores. The purpose is: “How do you make what’s available to the few available to many?” They realized that they had lost the connection and needed to step back, and that the internet was a beautiful [way to] bring that purpose alive.

Knowledge at Wharton: You wrote that the internet gives us an opportunity to drive a new era of purpose. Can you elaborate?

Craig: Ten years ago when I was doing this work, nobody was doing it. Now every time I turn around, somebody’s talking about purpose. What’s interesting is, why? Why is it so sexy and important right now? My sense of it is this: In the last 10 years, the level of uncertainty has increased dramatically within every organization.

If you look at this across banks and [other organizations], the timelines are dramatically shrinking. But we all still need some solid certainty to stand on. You have to lead from some place. People have realized the strategies are fragile, the tactics show up as a tweet in the morning. Purpose now becomes the only thing that doesn’t change, both for you as an individual, as a leader, as well as the organization.