When Amazon CEO Jeff Bezos visited China in 2007, he expected that one day soon China would be a double-digit percentage of Amazon’s sales. Yet, by 2019, Amazon, the most powerful and successful e-commerce company in the world, had quit China.

In Winning in China: 8 Stories of Success and Failure in the World’s Largest Economy, Wharton global fellow Lele Sang and Wharton professor of operations, information and decisions Karl Ulrich explore the successes and failures of several well-known companies, including Amazon, Hyundai, LinkedIn, Sequoia Capital, and InMobi, as more and more businesses look to reap profits from China’s 1.4 billion consumers.

Sang and Ulrich recently sat down with Brett LoGiurato, senior editor of Wharton School Press, to discuss their new book and what it takes to succeed in the world’s second-largest economy.

Brett LoGiurato: Can you both first talk about your initial interest in China and how that grew into this collaboration?

Lele Sang: I was a journalist covering business and politics in China. One of my reporting topics was the development of multinational corporations in China.

Karl Ulrich: I had been interested in China for a long time. I made my first trip to China in 2006, but I’d never really done much professionally there. And Lele actually just stopped by my office and said, “I want to write a book about tech companies’ failures in China.” And I said, “Lele, that sounds pretty interesting, but it sounds kind of like a downer, and are there really no companies other than tech companies who’ve tried to enter China?” That’s what led us to this topic of looking at all kinds of companies and both successes and failures of foreign companies in China.

LoGiurato: You chose to focus the book on eight case studies, spanning a variety of well-known large companies. When you were doing the initial research for the book, what drew you to these companies?

“We really didn’t want to write about companies that everyone already knew about.” –Karl Ulrich

Sang: In fact, we initially put together a list of over 200 companies, and then we figured out the majority of them based on our definition of success and failure.

Ulrich: We really didn’t want to write about companies that everyone already knew about. We didn’t want to write about Google and Facebook — and a lot of people know about Starbucks’ success in China — so we really wanted these to be new stories, the first time that someone had written extensively about these companies. And then we just looked for diversity across a variety of dimensions. We wanted companies that were outside the United States, that were from all over the world. We wanted companies that were in consumer, in tech, and in B2B businesses. And we wanted a combination of successes and failures.

LoGiurato: Of companies you profile, whose success most surprised you? And whose failure?

Sang: I think InMobi’s success mostly surprised me. InMobi is an Indian tech company, but the tech industry in China has been notoriously difficult for foreign players to break into. There are so many star players that have tried and failed, or who have struggled in China. So InMobi made it. It came to China around 10 years ago, but now it’s China’s largest independent mobile advertising network.

LoGiurato: Take us through your framework for identifying success and failure in China.

Ulrich: A lot of business books are just a lot of stories, and we really wanted to provide some structure and some framework to our analysis, so we developed a framework for understanding success and failure in China. First of all, we define success as meeting a significant fraction of demand in your category, with sustained competitive advantage. We felt it was really important to define success.

We then established three necessary conditions, and that is you have to have access to the market; there has to be demand for your product or service; and you have to come to the competition — to the arena — with some significant advantages relative to local competition. And then we considered five managerial factors. These are actual decisions that managers make in entering China, and they are commitment, government structure, leadership, strategy, and the product that you bring. And then, finally, we wanted to recognize that there was a really key role of luck or what the economists call “the exogenous factors” — things that are outside your control that can dictate your success or failure.

LoGiurato: Amazon is the first case you mention in the book. Amazon is obviously no slouch, and amid a pandemic, it has surged to become the second-most valuable company in the world. Why did you find that it failed in China?

Sang: We could use our framework to analyze this case. First of all, Amazon didn’t bring any competitive advantages to the Chinese market. And secondly, Amazon didn’t commit to the Chinese market, especially compared with its Chinese [competitors], JD and Alibaba. Thirdly, Amazon had a clumsy strategy. Its strategy was using a global template to manage business in China, which didn’t work out because of a different business environment in China. And Amazon’s structure didn’t give its China unit enough autonomy — it couldn’t even add a button to its website unless the headquarters said yes. Combining all the factors, Amazon didn’t make it in China.

Ulrich: But I think there’s something really interesting about the Amazon story, which is — was it, in fact, a good thing that they left China? If you look at what’s happened to Amazon since they left China, they have created a huge amount of shareholder value. You ask the question, if I had a few extra billion dollars and some managerial attention to invest in initiatives — if I’m Jeff Bezos — was it, in fact, the right thing to go after cloud services, AWS, other kinds of initiatives in my other markets, or to fight it out in China, where I knew I would have a bloody battle? And so while they failed, it may have actually been the right managerial decision for them to have invested elsewhere.

LoGiurato: The Norwegian Cruise Line’s entry into China brings up a really interesting example of something you touch on throughout the book: how cultural differences can boost or sink different companies — pun intended. Can you talk about the role it plays with something like the cruise industry, specifically?

Ulrich: Norwegian Cruise Line is a super-interesting example because certainly the conventional wisdom would be that you need to tailor your product to the Chinese customer. Norwegian Cruise Line made tremendous efforts to make its ships very Chinese, so you can imagine a lot of red and gold and dragons, and all of that. But actually, the Chinese consumer wanted a Western cruising experience. And so ironically, their efforts to localize their product actually backfired for them.

LoGiurato: The last company I want to talk about is Zegna, the Italian luxury brand. It has been another huge success story in China, but now it obviously faces headwinds from COVID-19. How do you expect it to respond moving forward?

“A lot of Western companies believe their brands are very strong, but their brands may not be strong in China.” –Karl Ulrich

Ulrich: Zegna is a fascinating company. It has been around for more than a century, starting in the hills of Northern Italy. Its success can really be attributed to a very long-term perspective and to tenacious management, largely by the same family. And if you think about it, Zegna has survived world wars. It survived essentially the destruction of Italy, its home country, in the middle of the 20th century. And so I predict that Zegna will survive this virus. Its tenacity, its commitment, its long-term perspective will, in fact, be its assets as it faces adversity.

LoGiurato: More generally, how do you expect COVID-19 and its lingering effects to impact the way multinational companies look to enter and operate in China?

Sang: I think COVID-19 doesn’t change the fact that China is a very attractive market as its economy continues to normalize. In fact, many industries in China have already rebounded, including manufacturing, retail, hospitality — even luxury. China is the first major economy to recover from COVID-19 because the Chinese government adopted a very aggressive approach to contain the virus, and it worked. As a result, many multinational corporations rely on China more than ever to deliver a positive outcome. Some companies, like Walmart and Starbucks, even added investment during the pandemic. I think when it comes to a [situation] like COVID-19, companies should look at it from a long-term perspective.

Ulrich: It’s really interesting. There might actually be a silver lining for those who make direct investment in China. With the existing trade conflicts, particularly between the United States and China, import/export is what’s largely impeded. And operations that are headquartered in China may be buffered somewhat from the import/export restrictions. So, it might actually increase the importance of having operations directly in China.

LoGiurato: The book is jam-packed with insights and takeaways, but if you wanted readers to come away with one lesson, what do you hope it is?

Ulrich: For me, the biggest lesson is to make sure to make a very realistic assessment of what assets and capabilities you really bring to the challenge. A lot of Western companies believe their brands are very strong, but their brands may not be strong in China. And so really taking a hard-nosed perspective on what are your assets and capabilities, and are they sufficient to overcome the inevitable friction in starting a venture overseas? That’s probably the most important insight from the book. 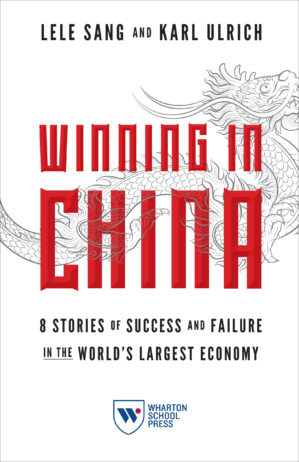 Get Winning in China, by Lele Sang and Karl Ulrich.