Former FCC chair Tom Wheeler discusses his new book, which places the current digital revolution into context with other periods of game-changing innovations. 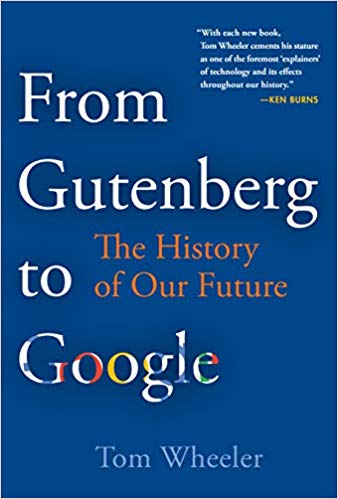 The digital revolution has dramatically changed life on Earth, making it easy to think we’re living in the greatest time of innovation. But a new book by Tom Wheeler, former chairman of the Federal Communications Commission, is a reminder that remarkable change has happened many times before. The invention of the printing press in the 15th century created upheaval and reorganized everything in society, as did the subsequent inventions of the telegraph, telephone and railroad. From Gutenberg to Google: The History of Our Future is an insightful look at the development of networks, the physical links that bind people together. Wheeler, a visiting fellow at the Brookings Institution, recently joined the Knowledge at Wharton radio show on SiriusXM to talk about why history often repeats itself. (Listen to the podcast at the top of this page).

Knowledge at Wharton: This is a unique perspective on history. Where did you get the idea for this book?

Tom Wheeler: I’ve always been a history buff, and my professional career has been built around new network technologies, so one thing just kind of led to another. When I became the chairman of the Federal Communications Commission, I had this unique situation where I had been studying the history of networks. I suddenly found myself in a position to be making history and putting into practice what I felt I had learned. When I left office, I pulled it all together in From Gutenberg to Google.

Knowledge at Wharton: You have said, “How we connect defines who we are.” What does that imply about our current era of technology?

Wheeler: From the earliest days of mankind, the connections that we had defined us. I don’t care whether you’re talking about animal paths or waterways or some of the early networks like the railroads. But the ability to relate to each other, both personally and economically, is a factor that is dependent upon the networks that connect us. How we connect affects what we do, and that is who we are. That has been a message running through everything in From Gutenberg to Google.

Knowledge at Wharton: When new technology is introduced to the masses, is the initial reaction of shock pretty much the same from one century to the next?

Wheeler: Yes, it really is amazing that the original reaction of people when they hear about things is to push back. “Oh my God, this is changing what I’ve been comfortable with.” My favorite example is that when Samuel F. B. Morse went to the Congress to get funding for his first telegraph line, when that bill got to the floor of the House of Representatives, everybody was laughing at it. The idea that you could send messages by sparks was just too much to believe. It literally was a circus on the floor. When the House finally voted, they voted 89 for, 83 against, and 70 abstentions because these members of Congress were afraid to go back and explain to their constituents how they were spending their tax dollars on this crazy idea of messages by sparks.

“From the earliest days of mankind, the connections that we had defined us.”

It’s the same situation today of how do you come up to speed with new technology? When we watched the recent hearings that Mark Zuckerberg had before the Congress, I think the only conclusion we could walk away with is that most of the members of Congress were not up to speed on the new technology. And it’s a representative body, so the people they represent aren’t [up to speed], either.

Knowledge at Wharton: Let’s discuss Johannes Gutenberg and the invention of the printing press. The ability to mass produce all kinds of books, including the Bible, changed the culture back then because reading was only for the elite. This was truly a transformative event around the world.

Wheeler: This is why I say that this was the original information revolution. The information had been hoarded away in handwritten manuscripts, locked in monasteries and other inaccessible places where it could be used and exploited by the powerful and the priestly. What Gutenberg did was to pick that lock and allow information to flow freely.

For instance, Martin Luther was one of the early users of the printing press, and that drove the Reformation. The Renaissance would probably have remained an isolated experience in northern Italy for a longer period of time had not the inexpensive reproduction of ideas been able to spread. The other thing that was probably the most important of all about the printing press was that it created the ability for ideas to challenge ideas. We call that the scientific method today.

Today, everybody talks about how much information is bombarding us. Imagine what it must have been like after the printing press when people who had been totally devoid of information had all of this information flooding them. The powers-that-be rebelled against that. Shortly after the printing press was developed, a Swiss scholar sat down and said, “I’m going to catalog all of the books that have been printed thus far.” He ended up warning of the harmful magnitude of books and how it will create nothing but chaos. Well, that’s kind of like what we’re experiencing today on the internet, isn’t it?

“What we’re living in right now is a period where the Darwinian evolution of both networks and computing have come together and created our new reality.”

Knowledge at Wharton: Moving forward a couple of centuries, there were the telephone and railroads. Can you talk about how that changed the development of the United States?

Wheeler: The railroad was the first high-speed network. From the beginning of humankind, geography and distance had defined the human experience. How far can muscle power take you in a day was a defining force. How far you can carry raw materials — whether it be coal or wheat — was a defining economic force. All of a sudden, the railroad comes by and destroys distance. It was the original death of distance. It totally reshaped economies and created the Industrial Revolution by being able to haul raw materials to a central point for mass production, and then haul the finished product back out to a connected market.

Immediately on top of the railroad came the telegraph. It became the tool by which to manage the railroad as well as manage these far-flung production capabilities. It introduced the first national news media, the first national financial markets. These two together in the middle of the 19th century created the reality that we take for granted today and are now living as a result of the internet.

Knowledge at Wharton: Can you talk about the impact of the internet?

Wheeler: Before we look at what the impact of the internet is, we have to realize that this did not just happen as some kind of a miraculous creation. You take the digital code of the internet and peel it back, and you go back to the concepts that Gutenberg developed of using the smallest pieces of information, assembling, disassembling — that’s the model that we use for the internet.

What we’re living in right now is a period where the Darwinian evolution of both networks and computing have come together and created our new reality, which is probably the most powerful and pervasive platform in the history of the planet. But the point that I make in From Gutenberg to Google is that we shouldn’t break our arms patting ourselves on the back and saying, “Oh, there’s never been change like this before.” There has been change like this before in the other great network revolutions, and we’re just on the cusp of being able to say that we’re equivalent to them because the network has brought us to this point. What happens next? What happens with artificial intelligence? What happens with blockchain? What happens with a network that is intelligent itself? And what happens with cyber threats? It is those kinds of issues that will determine whether or not our period is as transformational as the earlier periods of history. I’m betting it will be, but it’s going to be a challenge getting there.

Knowledge at Wharton: You make an interesting distinction in the book when you talk about the previous networks and how they carried assets. Today’s networks are creating the assets in the form of data and content, correct?

“We shouldn’t break our arms patting ourselves on the back and saying, ‘Oh, there’s never been change like this before.’”

Wheeler: Exactly right. One of the points that I make in the book is that data is the new capital asset of the 21st century. Every other capital asset in history has been limited in amount and limited in usage. There is a limited amount of oil in the world. There is a limited amount of gold in the world. And there are limits to how much the market can handle. For the first time, digital information is an inexhaustible supply, and the usage of it ends up creating a new digital product, which further expands. We’re at a fascinating point where the asset of the 21st century is going to behave differently from the assets of any other time in history.

Knowledge at Wharton: How do you deal with security in terms of these network revolutions? How was that viewed back in the days of Gutenberg or the railroads and the telegraph?

Wheeler: It’s a great question, and it has always been a huge question. The networks that connect us have always been attack vectors, so we shouldn’t be surprised today that the new digital network is also an attack vector. We call it cyberattacks now. How we handle those is going to be determinative in terms of just how transformational the networks themselves will be.

Knowledge at Wharton: Are we more adaptive to change than our ancestors were because it happens so rapidly now?

Wheeler: We are probably better at dealing with the change, but the change is coming at us faster than ever before, denying the buffer of time and adaptation that we used to have. One of our challenges is, how are we going to deal with change that comes at us so rapidly? It took 125 years before the telephone reached one billion people. It took eight years for Facebook to reach one billion people. That is change coming at us at a speed we haven’t experienced before, and it requires us to engage that change, not flee from that change. And it requires that we establish new rules as to what is expected of the companies that are using that technology to deliver new capabilities.

“Data is the new capital asset of the 21st century.”

Knowledge at Wharton: What do you want readers to take away from this book?

Wheeler: The takeaway from the book is, we’ve been here before. We shouldn’t panic. We shouldn’t obsess with it. And we should learn what our history is because it can inform us. We know that not engaging, but fleeing, is folly. We know that there need to be new rules that relate to new realities. We’ve seen this before, and it’s time for us to step up. It’s now our turn in the barrel. Let’s learn from the lessons of history and step up and deal with these changes, rather than running away from them.