Boston Philharmonic’s Benjamin Zander: Tapping into ‘The Art of Possibility’ 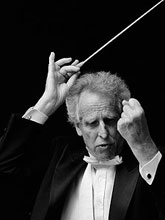 Put a CEO and an orchestra conductor into a room together, and the two will have more in common than they might imagine. The CEO faces management challenges, sure. But the average conductor presides over a notoriously unhappy, professionally frustrated group of people every day — orchestra musicians, who in a landmark 1996 Harvard study were found to be less satisfied with their jobs than were federal prison guards. Contrast this with the group of workers at the top of the study’s job-satisfaction scale: string quartet musicians. The players in this smaller performing group ranked the highest in job contentedness and professional growth.

For Boston Philharmonic Orchestra (BPO) conductor Benjamin Zander, the reason for the disconnect between the outlooks of orchestra musicians and those in small string quartets has to do with leadership. A string quartet is a cooperative group; an orchestra is led by a conductor. “Conducting is the last bastion of totalitarianism,” he noted in a keynote address at the 14th Annual Wharton Leadership Conference. Orchestra musicians are not permitted to speak to the conductor. If they do, it must be in the form of a question. A string quartet is composed of four autonomous musicians, each with power to influence group decisions. It’s clear which paradigm leads to happier, more successful artists.

Surrounded by a corona of white hair, Zander’s physical presence suggested a ball of tightly wound energy ready to explode. Explode he did — into song, racing through a lightning-fast piano rendition of the opening to Beethoven’s Fifth Symphony. His passion and exuberance are widely recognized: In a “60 Minutes” profile, journalist Morley Safer called him the “Energizer Bunny of classical music.” Zander told the Wharton audience that every action involves a deliberate choice. A musician approaches a piece of music and chooses to perform it by rote, or by questioning his or her assumptions. Being open to interpretation can transform even the most familiar piece, he said.

To illustrate his point, Zander led the audience in singing “Happy Birthday.” At first, it sounded like the usual rendition heard at every child’s birthday party. The second line of the song could be changed by adding more emphasis, he noted, suggesting that the audience might imagine a sincere wish for happiness for the birthday boy or girl. It worked: Soon the hall was filled with a more powerful, harmonic rendition of the song. “Most of the time, we do what I call singing from the neck up,” Zander said. This type of singing may be sufficient, but does not yield the best results. Singing from the neck up means you are using your head only — and ignoring the rest of the body, thus ignoring a world of possibility.

“Now you can all add to your resume that you sang under the direction of the conductor of the Boston Philharmonic,” Zander joked. The exercise was intended to illustrate his philosophy — that ordinary things in life can be transformed if you challenge your assumptions about them. The strategy works for businesses, too, Zander said.

Zander has not always used this leadership style. For many years, he ran his orchestra in the old “dictatorship mode.” In fact, he said, he ran his life this way. For a long time, it worked.

Born in England, Zander was initially trained in cello and composition by his father, a Holocaust survivor. When Zander was nine, Benjamin Britten, England’s leading composer, took an interest in the boy’s compositions and invited the family to spend several summers with him. Britten became a mentor, as did Britten’s close associate, Imogen Holst, daughter of composer Gustav Holst.

Zander left school at 15 to study in Florence with Spanish cello virtuoso Gaspar Cassadó, who was his teacher and mentor for the next five years. He completed his cello training at the State Academy in Cologne, traveling extensively with Cassadó and performing recitals and chamber music. In 1967, Zander began teaching at the New England Conservatory (NEC), where he still presides over classes in interpretation and regularly conducts student orchestras. He also became the artistic director of a joint program between NEC and Walnut Hill, a boarding school for the performing arts.

In 1979, Zander became the conductor of the Boston Philharmonic Orchestra. In 31 seasons, the orchestra has performed an extensive repertoire with an emphasis on late Romantic and early 20th century composers, including the complete cycle of the symphonies of Gustav Mahler. The BPO has recorded five CDs, all of which are listed in the Penguin Guide of the Best Recordings of the Past 20 Years.

However, the top-down style of leadership that Zander cultivated only led him so far. When he and his second wife, therapist Rosamund Zander, separated, Zander did some soul-searching and awakened to a new paradigm. Instead of a downward spiral of thinking, he turned to what he calls the art of possibility. He and Rosamund remained partners. Their relationship evolved into a creative partnership — and together they wrote a book about the nature of transformation titled, The Art of Possibility.

Since then, Zander’s musical, teaching and lecturing practices have been devoted to inspiring others to achieve. Today, Zander enjoys an international reputation as a guest conductor. He conducted the Israel Philharmonic for three consecutive years, and has conducted orchestras as diverse as England’s Bournemouth Symphony, the Scottish and Irish National Orchestras, the Saint Petersburg Philharmonic, the Malaysian Symphony, the St. Louis Symphony Orchestra, the Indianapolis Symphony, the Youth Orchestra of the Americas, the National Youth Orchestra of New Zealand and the Australian Youth Orchestra. During his 35-year tenure as conductor of the New England Conservatory Youth Philharmonic, he has taken the orchestra on 13 international tours, and made five commercial recordings and several television documentaries for PBS.

To celebrate the Boston Philharmonic Orchestra’s 25th anniversary in 2003-2004, Zander and the BPO completed an all-Mahler season, including a concert of Mahler’s Second Symphony at Carnegie Hall in New York. Their recording of Stravinsky’s “The Rite of Spring” was named as one of the 10 most important musical events of 1992 by The New York Times.

With the Philharmonia Orchestra of London, Zander has recorded a series of Beethoven and Mahler symphonies. Each disc is accompanied by a separate commentary in which Zander offers a discussion of the music so that even people with no musical training can enjoy the performance. High Fidelity named Zander’s recording of Mahler’s Sixth Symphony the best classical recording of 2002; his recording of Mahler’s Ninth Symphony was nominated for a Grammy Award.

The message about possibility is one that CEOs and world leaders have taken seriously. Organizations as disparate as McKinsey, Accenture, Pfizer, Disney and the U.S. Army have brought him in to lecture on leadership. He has spoken four times at the World Economic Forum in Davos, Switzerland. Recently in Davos, he was presented with the Crystal Award for “outstanding contributions in the arts and international relations.” The Art of Possibility has been translated into sixteen languages.

Speaking on leadership and problem solving, Zander emphasized that everyone has options. “You can face problems with resignation, anger or possibility. These are all valid responses. You have a choice.” Choosing possibility isn’t always easy, he noted, but it will lead to excellence. It will also lead to a challenging of assumptions — and assumptions are often roadblocks to innovation.

“Everybody wants out of the box thinking; the question is, how do you get it?” said Zander. “It’s very simple. You ask a question: What assumptions am I making that I don’t know I’m making?” The key to success inside an organization, he added, has to do with voicing these assumptions. “Every organization, every human endeavor, has to have someone whose job it is to notice what assumptions are being made … and [who] has permission to say so. Anybody from the bottom to the top should be able to speak about assumptions without fearing loss of any kind.”

In his graduate class at the New England Conservatory, Zander gives each of his students an “A” at the beginning of the year and asks them to write a letter describing who they will have become by the following May when the class ends. Teachers (and society at large), he notes, tend to treat “A” students quite differently from students who are given a C minus.

When asked to explain the effect of this practice, Zander replied: “When students are given an unconditional ‘A’ in the first class of the year, and describe in a letter dated in the future who they have become over the year, it makes the students and the teacher committed partners on a fascinating and joyful journey, where, for the time being, standards are in the background, and there is no striving — just engagement, participation, and expression. They are liberated from fear to do the work they have always wanted to do, and their performance, we have discovered, is likely to surprise and delight their teachers, themselves and all who hear them.”

When Zander’s musicians make a mistake, he teaches them not to give in to the voice of doubt or self-recrimination. Instead, he has instructed his students to say “How fascinating!” whenever they make a mistake. To Zander, this means throwing up one’s arms and exclaiming “How fascinating!” at top volume. His point: Every setback is an opportunity to learn. Every setback represents a world of possibility. “Education is not so much about the transference of information as the opening up of new categories,” Zander noted. “When you are educated in that sense, you are actually walking in a different world. The question becomes, ‘What are you going to do now?'”