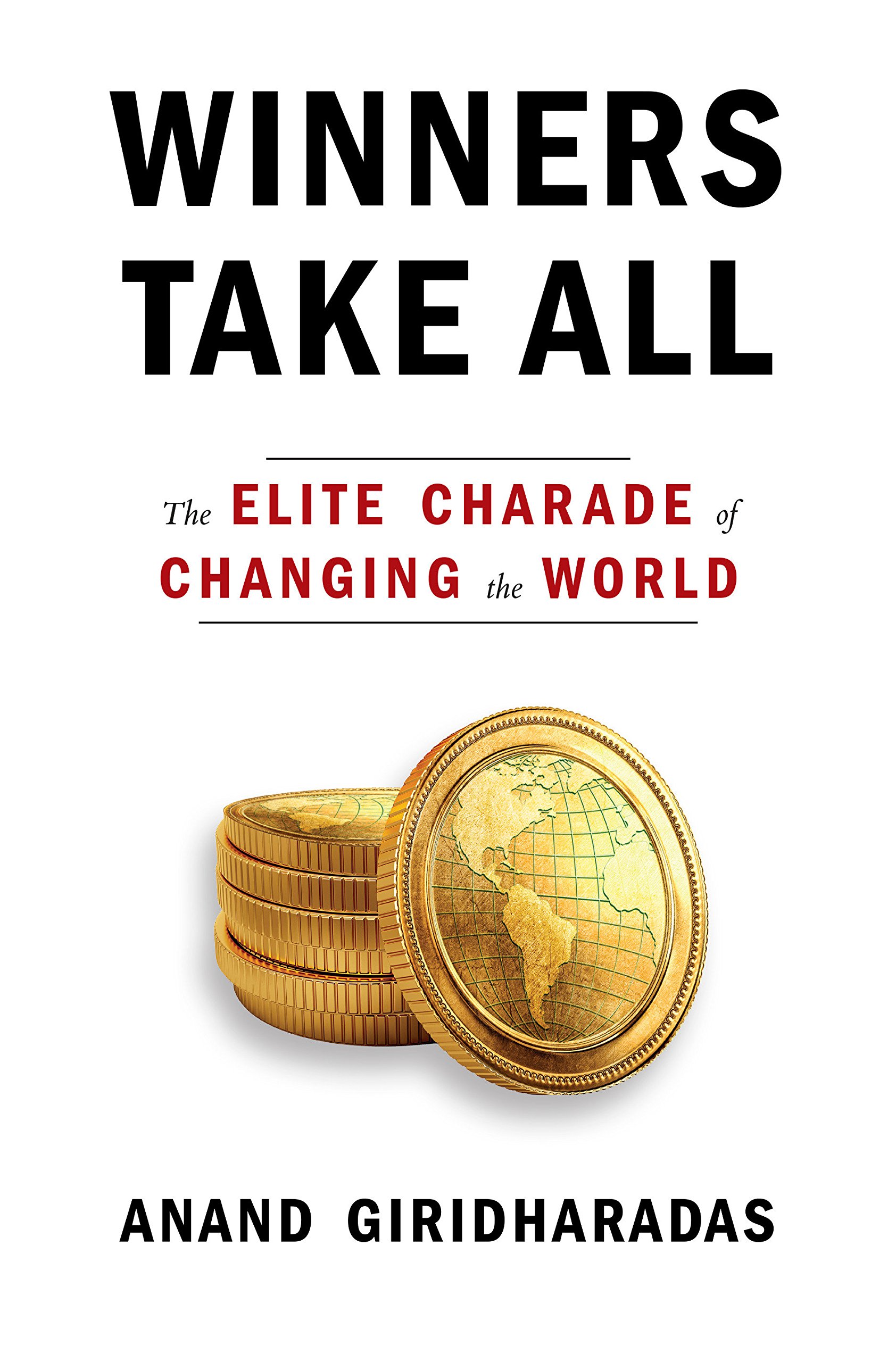 Peter Vanham, U.S. media lead for the World Economic Forum, critiques the condemnation leveled at some prominent mainstream economic ideas on how to overcome income inequality — and their supporters — in this review of the new book, Winners Take All: The Elite Charade of Changing the World, by author and former New York Times columnist Anand Giridharadas. You can listen to a recent interview with Giridharadas from the Knowledge at Wharton radio show on SiriusXM using the player at the top of the page.

Is the World Economic Forum, the organization I work for, part of an “elite charade”? Is its real impact to do well for itself and its members, rather than “to improve the state of the world” as it claims? It is, with a bit of a stretch, the premise of a new book by Anand Giridharadas, Winners Take All: The Elite Charade of Changing the World. He asserts that the global elite do more harm than good, even if they think otherwise.

He isn’t the only one to make the claim. Nobel Prize winning economist Joseph Stiglitz, in a New York Times review of his book agreed there is “an elite that, rather than pushing for systemic change, only reinforces our lopsided economic reality — all while hobnobbing on the conference circuit.” Are they making a fair assessment? Before jumping to conclusions, let’s review their analysis.

In his book, Giridharadas starts with a somber observation. The world our youth grows up in, he writes, is one where the appeal of working for McKinsey or Goldman Sachs is greater than that of working for an NGO or government – even when your goal in life is to change the world. Their parents would stand on the barricades against war or capitalism; the new generation is more compliant.

As an example, he points to Hilary Cohen, a recent graduate from Georgetown University, who in college did develop a sense of wanting to do good in her life and career. But if in the past, a socially involved person like her would most likely end up joining the ranks of government, a religious organization, or an NGO, she instead chose to work for McKinsey.

Disappointment for young people like Cohen is often quick to follow, the author thinks. As soon as people enter such companies, they realize that the majority of the projects there are not about doing good, but about optimizing the profits of the company they consult. But from early on in their career, they’re molded by companies who form the heart of the current capitalist system.

I can relate to this first part of the book. I, too, joined the ranks of a consulting firm, Bain & Company, lured in part by the idea that some of its consultants wound up working for Bridgespan, a pro bono consulting firm for NGOs. Of course, I ended up working for banks and private equity firms instead. So far for the idealism, that’s true. But is it really a bad thing, to work for a company rather than in government?

The real problem with this situation, Giridharadas writes, is not the over-promising by companies to a younger generation of do-gooders. It is the truly held belief by these companies that all of the world’s problems can be solved through “corporate social responsibility” and philanthropy, that taking on societal problems in an entrepreneurial way can be a “win-win” for the entrepreneurs and for the people they want to help.

“Intellectuals and critics lost out to more agreeable ‘thought leaders.’”

But this ideology of the “harmony of human interests” doesn’t check out, he writes. “It radically overestimates who will benefit from change,” Greg Ferenstein, a former reporter of TechCrunch, tells him. In reality, suffering cannot be innovated away. In a market economy, some people will be left behind. “Win-lose” is a more probable outcome, if a benign government doesn’t correct. There is profit to be made from misery, but it won’t fundamentally end misery.

What compounds the problem, writes Giridharadas, is that the “optimism” ideology is strongest in the new epicenter of the global economy: Silicon Valley. Venture capitalists and entrepreneurs there are, at the same time, the most ambitious and the least cognizant of their adverse impact. They want to “own the universe” but act like they’re underdogs when it comes to their true economic impact.

Yet it is precisely the new platform economy they’ve been building which does most to upend the once dominant middle class. Why? Because “the Ubers and Airbnbs and Facebooks and Googles of the world are at once radically democratic and dangerously oligarchic,” according to Joshua Cooper Ramo, a journalist and authority on networks Giridharadas talked to.

Indeed, these platform monopolists allow everyone to be part of their platform but reap the majority of benefits for themselves, and make major decisions without input from those it will affect. In this world, Giridharadas writes, users are like medieval peasants and the tech giants like Leviathan princes. They turn back the clock centuries rather than to bring us to a brave new world.

Sadly, we are not hearing too much from people who make these sorts of analyses. According to Giridharadas, that is because intellectuals and critics lost out to more agreeable “thought leaders.” These TED-styled thinkers “zoom in,” focusing on individual opportunities in a way that is compatible with a win-win ideology. They talk about possibilities, about self-improvement.

The critics who do “zoom out” to look at systemic issues, on the other hand, fell out of favor with the business elites. They dare speak of inequality, its causes and painful solutions, but are told to tone it down. They speak of win-lose, a faux pas in the eyes of “philanthrocapitalists.” Several people Giridharadas spoke to, including a TED speaker and foundation president, were in that situation.

“Even Michael Porter, the guru of modern enterprise theory, now has second thoughts on the effects of the doctrine he helped spread.”

The result of all this, writes Giridharadas, is “the-Trying-to-Solve-the-Problem-with-the-Tools-That-Caused-It” issue. Consulting firms like McKinsey, philanthropists like Bill Gates, organizations like the World Economic Forum: they may solve individual problems. But the price to pay is that societal problems are “recast in the light of a winner’s gaze.” The macro-effect is that nothing really changes.

A similar problem exists in the business world at large, Giridharadas believes. Even Michael Porter, the guru of modern enterprise theory, now has second thoughts on the effects of the doctrine he helped spread. “Somehow in being efficient, clever and productive, people thought they had the license to stop thinking about the well-being of everybody else in the system,” he said.

So where did that attitude come from? And how can we change it? The origins, Giridharadas believes, are to be found in America’s Gilded Age. Early monopolists and philanthropists like Andrew Carnegie initiated “the idea that after-the-fact benevolence justifies anything-goes capitalism.” The idea, however faulty, persists until today.

What that idea fails to capture, he writes, is that many people aren’t left behind because of their inability to adapt to technological changes – as we like to believe – but because of their ancestry, color or disability. And if that is true, if the playing field on which wealth is accumulated is not level and fair, should individuals be allowed to accumulate wealth on this scale in the first place?

No, the author says. Yet philanthropy, a “doing well by doing good” attitude, and the idea that the private sector can solve societal ills, are only gaining more traction. Initiatives like (the now defunct) Clinton Global Initiative, Bloomberg’s Global Business Forum — and indeed, the World Economic Forum — tell commercial enterprises it is good and right to do good and build their brands.

Doing so, these private initiatives for special public purposes “crowd out the public sector, further reducing both its legitimacy and its efficacy, and replace civic goals with narrower concerns about efficiency and markets,” Aaron Horvath and Walter Powell, two Stanford sociologists, tell Giridharadas. It is the core of the problem. It stands in the way of a more profound solution.

Certainly, it is good to “lure the private sector into the public problem-solving arena.” But the outcome should never be that the private sector takes over control, whether directly or indirectly. Their responsibility is to their shareholders alone, while that of government is to the entire public. Such private interests can never really do good for society at large, Giridharadas believes.

So, where do we go from here? The solution, Giridharadas writes, is “to return to politics as the place we go to shape the world.” Don’t try to change the world on your own, Chiara Cordelli, a philosopher, advises. “Support institutions that can, in the name of everyone, secure certain conditions for a more decent life.”

Is it even possible to disagree with that analysis? I would say that Giridharadas captures the mood of the moment well, at least in the United States. There, real median wages haven’t risen in almost 40 years, and capitalism has become an unchecked and all-encompassing force. Giridharadas eloquently exposes this “charade,” as he calls it, well.

But if there is one criticism to make, it is that he brushes the situation elsewhere in the world with the same brush. In only one chapter, he extensively quotes some leaders from other parts of the world than the U.S., like Argentina, the U.K. and Italy. But he fails to notice — or mention — that the society built in places like Germany or Scandinavia is completely different from that in the U.S.

The premises on which, for example, the World Economic Forum was initially built on, had much more to do with the German post-war model of Mitbestimmung, or co-decision between employees, management and shareholders, than the pre-eminence of shareholders alone. That kind of model is precisely one Giridharadas now suggests is a possible solution.

He’s wrong also to state that in international institutions and business conferences, “inequality” cannot be spoken of, because doing so would reveal the system issues with the current market economy, and its win-lose reality. The World Bank regularly publishes data and reports on inequality. And income inequality has featured prominently in my organization’s Global Risks Report for years.

What is more, the World Economic Forum a few years ago launched its flagship Inclusive Development Index. According to the report’s author, Richard Samans, it did so precisely because “GDP growth cannot in and of itself be relied upon to generate inclusive socioeconomic progress.” He therefore introduced new ways to measure the wealth of a nation, focusing on … inequality.

All of that is not to say that Giridharadas doesn’t make a compelling point. There are plenty of examples I could think of that corroborate rather than disprove his analysis. That is perhaps also why Professor Stiglitz, although having been part of this “MarketWorld” for decades, now also speaks out in favor of Giridharadas’ point of view.

But in the end, Giridharadas takes a few too many shortcuts. The “MarketWorld” he speaks of is not as black and white — not as much of a “charade” if you will — as he portrays it to be. His book is an eye-opening read, and one that much deserves to be read by the elites it calls out. But to be most powerful, it should have spent more time focusing on policy responses than on laying easy blames.